Not overrun with hunters; very dry; good bird #’s. My partner was done quickly, as were another group from Iowa that hunt the same public land that we also hunt. I needed more time, but that’s fine. Got some good walking in…didn’t lose any birds.

Been waiting for the first report. Good luck the rest of your trip.
W

I didn't get out until 4. Hunted a small 20 acre piece of private just to let the dogs run. Didn't
find any birds and I really didn't expect to as all the fields are out around it. Some of the neighbors picked corn fields have nice weedy draws and I am sure there were birds out there.

Went to WPA that had standing corn on 1 side and picked corn on the other 2. Slough is dry so I got my first ever chance to check out the back boundaries. Took Willie out by himself as he needs work on pinning birds down as he points from way off and the pheasant just move. I wasn't 15 yards from the truck and he went on point. Wind was 15-20 in our face so I was sure the bird wasn't near us in the shirt grass. 50 yards and 4 relocations and a rooster busted out ahead. I didn't shoot as I was to slow recognizing it was indeed a rooster. Bird stayed just off the dry slough bed and was hard to see. Willie did point a dozen different birds and was better about working the hot scent. After all those hens he was working a rooster that tried to sneak off but I got him and Willie made a nice retrieve.

Put Willie up and got the other 2 out for the last hour. As the sun was going to be in my eyes hunting into the wind I circled back out where Willie and I had been and came in from the west to hunt the south edge. I had seen a half dozen birds that flushed wild head out there so I knew we wouldn't be wasting energy. Got a couple great points on hens out where we had been. Then as we hit the south edge dogs were on point 60 yards in front of me on the edge of cover. I was uncertain as to whether it was still public land so I didn't shoot the cackling rooster as he exploded with a couple hens as I approached. I now know that boundary so it won't happen again !
Worked the rest of the edge back and had a few wild flushes and 1 point of a hen right under the dogs nose
W 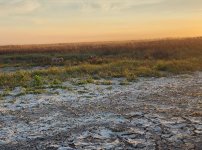 Always been water here so it was kind of nice to high tail it across the open areas to be able to go where I couldn't get before.
B

Talked to others, not great results across the board. Dry beyond belief…birds near water, it seems…makes sense.
H

9 guys got 18 birds. Mostly older guys that did not hunt that hard. They were happy.

Talked to neighbor and they had 24 for 10 guys.

benelli-banger said:
Not overrun with hunters; very dry; good bird #’s. My partner was done quickly, as were another group from Iowa that hunt the same public land that we also hunt. I needed more time, but that’s fine. Got some good walking in…didn’t lose any birds.

You were outshot.
B

Could be! Only had 1 rooster flush there, got him. Got my next 2 at the next spot. Had a snafu in some cedars…like I was hunting ruffed grouse…

Can’t emphasize how dry it is…got spoiled in ND…decent amount of water, helps for dog cooling…

Gotta say a little surprised. We passed through probably 60 or so miles north of you last month coming from MT and at that point was still moist up there. Will be interesting to see what it looks like in 2 weeks when we get there.
B

Could be different up there…think it is.
B

Fantastic "regular" opening weekend, although really dry & windy. Ace was fabulous. I was pretty decent. Hunted a little WPA & a CREP piece yesterday. Got 3 fairly easily. Saw lots of hens & real young birds the last 1/2 hour. Hunted 1 WPA today. Again, real good numbers. Hunting into a 20 mph wind along the edge, picked beans, I think they must've been out in the beans, seen us, & ran up the fence, because most were flushing 150-200 yds ahead. Still got 2. Missed a long one. Had to cross the main slough to get back to the truck after shooting closed. Flushed another dozen or so, including 4 roosters that would've been easy. They were apparently going to roost in the cattails, which surprises me a bit this time of year with so much nice grass right the heck there. Anyway, great weekend. Initial thoughts are that numbers are up in the areas I hunt. Really looking forward to the next 3.5 months of hunting! Picture from yesterday.
In 5 public land outings (including 1 youth & 2 residents), I've had exactly zero competition for my spots. None. Well, except for last weekend, 1 guy headed out into my spot just as I was finishing up my limit.
Also, last bird of today, Ace flushed him on the edge of cattails & I dropped him hard at about 25-30 yards in the cattails. Ace got right over there. Looked & looked. Nothing. He eventually started venturing further away from the drop area, & having played that game many times, I just let him go. While he did his thing, I decided I'd kick around & find the bird I knew to be lying dead very nearby. Maybe 7-8 minutes later, here comes Ace from "way over there" with a rooster in his mouth. No tail feathers left, indicating a struggle/chase had taken place. Upon cleaning....young bird, several body hits, 1 broken wing, 1 shattered thigh. He HAD been hit hard. He just didn't care. I've said it many times, but the rooster pheasant's will to survive never ceases to amaze me. 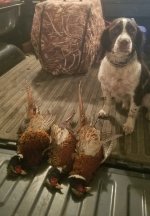 Traditional opening day with dad's side of the family. Only 8 of us this year. Lots of corn, lots of pheasants (especially hens) and three ended up going home to the freezer.

Went out yesterday with my daughter. I let her pick the spots. First one was tough, walked almost 45 minutes to see one hen flush and heard one other. It was mid afternoon, so it wasn't surprising. Let my daughter pick the next spot and we ran into 15 or so birds, put two pheasants in the vest, lost one that wasn't very well hit, so I'll be back to get him in the coming month.

All in all, I'm seeing good bird numbers. To echo everyone's sentiment, it is dry. The wind wasn't a big help for hunting either. Still 95% of the corn standing, that will change starting today and going forward. It is very cold. 20 this morning, forecast of 9 tomorrow morning, but then we'll warm up. It feels dang good to know that pheasant season is 100% back on.

That's an understatement. Looking at the photo, its beyond that and cracking.
J

Just got back from Sd opener, my 26th year. Had a great time as always, wind was terrible and was very dry. Didn't get my limit but still good enough. Dog had issues with strong wind and dry conditions. My only problem was this being the third year for habitat money and not seeing any improvements made me scratch my head, in fact most GPA that I hunt are in the worst conditions I have ever seen, I know it takes time but to see nothing new and conditions worse was no good.
You must log in or register to reply here.
Share:
Facebook Twitter Reddit Pinterest Tumblr WhatsApp Email Share Link
Top