Small, but meaningful steps in training

Maggie is a 7 year old ESS who hadn't been trained, other than socialization. I've had her about 2 months, and have been working steadily, if slowly, 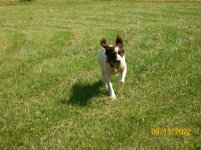 to get her to work with me. Fetching was often confusing to her, so I went to kitchen training, making it play, then play with some insistence on obedience, then play with some occasional rewards. She's getting the idea and starting to enjoy it. I'm hoping to take it from a game to a job she enjoys. It occurs to me I'm not just training a dog, but making her a partner--a status she hadn't had in her life-to-date.

We went outside with the retrieving dummy yesterday, after working with tennis ball, bouncy plastic containers, and the dummy (the RETRIEVING dummy) in the kitchen. I apologize in advance for the quality, my first use of a video option in a somewhat primitive Kodak easy-share camera was a failure; something about MOV format to a posting-compatible format needed.

The achievement will mean little to folks who've started from puppy hood, but this older dog has been puzzled by a lot of the actions and commands I've been presenting her with it. Her ESS disposition has been of great benefit in taking in daily exposure to a new world and becoming a constant companion.

Last edited: Sep 21, 2022
Kis
For hunters, Fall is the island towards which we swim all year.

She will get it. Just takes a little longer when they get a late start on life. I bought my current Brittany when she was 6 months old. Hadn't had a lot of socialization and didn't know a thing. Didn't even have a name. She's turned out great, smart as a whip and the most loving dog I've ever had.
Janee's August Breeze - Bree
7/6/2016
http://gundogcentral.com/view_pedigree.php?pedigreeID=84414&sireID=0&damID=0&generations=5

The On-going education of Maggie 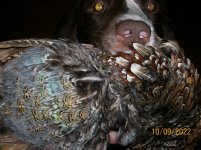 Well, we've gone through fetching socks, soft watch caps, half an empty
peanut butter jar (which bounces like a ping-pong ball), a five-year
old pheasant wing, a 1-week old pheasant wing,
two retrieving dummies with new pheasant scent on them, the recently shot
full-bodied fresh pheasant itself, and then the pheasant skin (salted),
wrapped around some newspaper and tied by lots of string.

The good sign? She got excited when we transitioned from the dummies
to the pheasant skin outside on the lawn.

Gun shyness:
On-going adventure: drop pot lids on the floor in the kitchen (we're
talking 10 or 12 pot lids) while laughing uproariously to make it fun,
and shooting the occasional .22 outside when Maggie is inside. Once
outside when she was around the edge of the house; after the shot, she
came charging back to stand on the porch...not quite scared, but on
guard a bit. Just pulled bullets and powder from some .22s for fetch/shoot work.

She is a sweetheart, though. Delighted in getting loved up and fed
treats. Even playing tug-of-war with Tinker, contesting which dog is
going to bring it back to me.

Life goes on. Tink and I have gone out on Wednesday and Today (Friday)
over to Yellowstone; one bird popped up and I drew feathers, but it
didn't flinch as it flew far far away. All the other hunters out there
had gotten no birds.

BUT, for the first time in two years I made it all the way back to the
stand of pines we hunted towards when friends were here a few years ago--about
a mile in on the property. I went over the
the low-land that we had also hunted hunted that one day. An absolute
nightmare for weak legs on really rugged terrain, hidden by high
weeds. Hidden potholes, high weeds, junk trees and never cultivated
in this century--the stuff ankle damage is made from.

Celebrated that hunt by outrageously painful leg cramps in my thighs
and calves about 4:30 in the morning. I think it was all that high
stepping over the weeds and potholes in that lowland.

So Maggie is coming along, albeit more slowly than I had hoped. I'm coming
along, at much the same pace, and Tinker is wondering why Maggie is getting
so much attention and why I am mostly shuffling rather than walking.

(And, the date is still wrong on the camera. Sheez.)
Last edited: Nov 23, 2022
Kis
For hunters, Fall is the island towards which we swim all year.

The Framework held together. 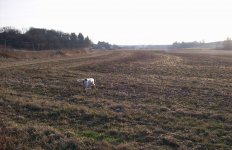 Took Maggie for a walk around the field below the house today. This is the fourth or fifth time we've made the trek. I carry a shotgun with steel shot, just in case a woody pops up, or in the very unlikely case that a pheasant may have moved in to avoid the deer hunters.

She ranges well, stays with me and changes direction when I do. That "partnership" I was working on seems to have had some effect. We went down and across back to the side of the field that is across from the crik. Maggie worked the high weeds and I struggled through them; she was all exploration--not sure what for or how well her nose works yet.

We got about 3/4s of the way home and she was working the slightly higher brush and weed section near the rocky start of the incline to my house. Maggie was getting more interested and circling around a stand of tall bushes. She looked over to me and I encouraged her, expecting a rabbit to disrupt the nice walk with the dog. I'd been warned about her propensity to take off on a rabbit chase; once she'd pulled the same thing after spotting a deer in the field below the house. The young buck was probably spooked by some corn harvesting. Maggie took off like a shot (that seven year-old dog can boogie when she wants to) but did respond to recall (whistle and voice--no collar work).

This time, she went back and tail wagging furiously, circled the brush, darting in and out.
I yelled some encouragement (not needed) as she worked the brush. She disappeared and then came out the far side with something grey in her mouth. She walked/trotted the 40 or so yards and dropped an opossum about ten feet from me, looking up tentatively at me. I became a dog cheerleader for her; high praise, lavish petting, over and over.

She had hunted with me for this entire hunt/walk and found and RETRIEVED prey. All those weeks in kitchen training had sunk in! She celebrated with me and went back to check on the opossum. It was still in fine shape, no marks or blood, and was using what I consider to be the dumbest self-defense technique that ever evolved. (But hey, opossum have been dated back to prehistory, so what do I know?)

I don't seek out opossum, but when I encounter them, I view them as egg eaters of game birds and dispatch them. I used a small .22lr revolver I had with me, making sure that Maggie was behind me. I didn't look for her reaction, just went about my business and turned towards her as she was approaching the critter again. No fear, some caution, but none of the frantic gun-shyness she had arrived with back in July. All that lid dropping and clapping, book dropping, and most recently, the firing of .22lr shells from which I'd removed the bullets and powder, and had it in my pocket as I walked around inside the house. I'd take out the revolver, pop a cap, put it away and just go about my business. The .22 cap is louder than a kid's cap gun, but not as loud as a blank.

So, the new, used, dog who came home scared, submissive, and fearful after very bad training with the original owner and then became a puppy factory for some years, resisting the efforts of a skilled field dog trainer, had just hunted with me, found, retrieved (without direction from me) the prey, and was not traumatized by the gun shot that was a few feet away from her.

She was pleased by the attention, but lagged behind as I started heading for home. I just said her name, and she came back to my side and then forged ahead for new adventure.

I'm really pleased that all the pieces so far have fallen into place. No guarantees than she won't have skitters when a shotgun goes off sometime in the future, but the framework for a hunting partner has held together for the first outdoor step. 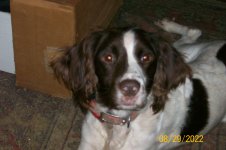 Good dog, Maggie.
Last edited: Nov 24, 2022
Kis
For hunters, Fall is the island towards which we swim all year.

Hooray for Maggie!! (and you too)

She's a springer, so has the physical attributes & brain power to become whatever you wish. But at a bare minimum, you'll always have a fallback to a premier possum dog. 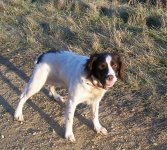 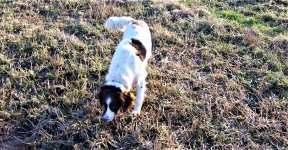 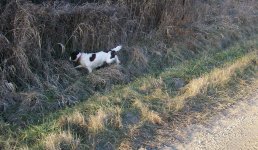 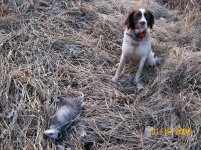 Granted it's not much, but it took her seven years to get this far. I'm quite proud of her.
Kis
For hunters, Fall is the island towards which we swim all year.