I try not to get too worked up about the weather, as it is the one thing we can't control with regard to bird numbers. With that being said, other than a relatively rough January (here in eastern IA/Southern IA), I think this is shaping up to be a very mild winter. I could be very wrong, and we end up with another 25" of snow that sticks around until late March, but I cant help but think we will likely come out of this winter in pretty good shape.

The snow accumulations weren't any more than average around here, but it really did seem like the temps from late December-January were pretty brutal with some howling winds and bitter cold right around major snow storms. I guess that's pretty normal, just seemed (anecdotally) to be worse than normal from a temp/windchill perspective. The good news is that we didn't have any snow until late December, and so the birds should have entered winter in pretty darn good shape.

Where we sit now, most of the fields have very little snow cover and the 10-day looks like it should help melt most of the remaining snow (atleast where it hasn't drifted).

I realize this is an Iowa-based thread but here in Minnesota we just had the coldest January in a decade. Average snowfall, but very cold. And this was preceded by the warmest fall on record.

We are still in a major drought even though its the middle of winter. We are going to need a monsoon of rain this spring to make a dent. I would have to imagine that Iowa is in a similar situation - moisture is needed whether its snow or rain.
I 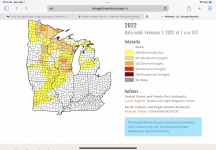 I am in central Iowa. We have had slightly below average snowfall but not too much below. We have had cold days, but not prolonged cold like last winter. As you said, the forecast for the next 7 days looks favorable. I think we are in pretty good shape so far but still a couple months left to get buried. I would take a little dry over a little wet in the spring/early summer.
G

Didn't realize that it had improved that much in western MN. Thanks for posting @IsThisHeaven?
H