I hope everyone had a fun and safe Thanksgiving Day. I tradtionally hunt pheasants, usually 3 if not 4 days over this holiday break. Post your results on your hunts if so inclined. I saw more trucks in fields today than on any of the weekends since season has been open, so a lot hunters were out on this absolutely perfect day.

Our group of 3 got 7 in the first field before 9:00, a new spot for us, will be trying it again! Then we when back to the field that produced a 6 bird limit last saturday and found the last 2 around 10:00. The weather couldn't have been any better! I rested my dog today, as my buddy has to work tomorrow, his dog was great today. I offered to block, which I never get to do, since I almost always have had my dog in the past 12 seasons. I went 4 for 4, conserving shells I guess, one easy shot, the others weren't what I was used to, but made it work. No lost birds the past 2 weeks and only one since losing 3 on the opening Saturday.

A friend and fello hunter bird hunter stopped by as we were heading back to the trucks...here is our group 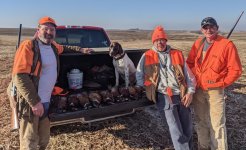 Tried another new place this morning with my son, he got one there, the only rooster we found. This was his first time going for a long time. On to another couple draws, shooting wasn't as good, we both missed a couple, but we each got another one. Another perfect morning and with my boy...good stuff. Hope I can get him back out some more.

Saturday in Iowa was yet another perfect bird hunting day, didn't see any other hunters, heard a few shots. We got our 6 by 11:00, dogs were great, shooting was better today. No unrecovered birds, even hunting our incredibly thick crp for the last 3. I got to the city after hunting and brought home a good suppy of seasoned rice packs, cream of mushroom soup and more quart sized freezer zip-lock bags. I apologize for the sorry photo. 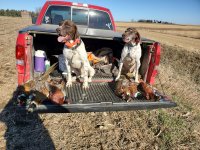 Good to hear hunters are doing well in IA. We used to hunt there a couple times a year when they had more CRP and higher bird numbers.

Final day of the break, my buddy and I got 5 and called it good around noon. Gave my dog another day-off, he earned it. Weather did change, temps were around 30 and the winds were close to that also! Looks like I will be eating pheasant 3 times a week...or more, to keep ahead of the possiession limit, which is not a bad thing!

A decent amount of the CRP was mowed and baled or grazed, including 2 fields I hunt...did hunt...maybe it just concentrated the birds into the nearest cover...those fields will not be good for nesting until a good amount of new growth happens next spring. I have hunted only private ground this season, which is normal, not much public ground within 30 miles of me, a few fields of IHAP, but I have to assume they get pounded every day. I have plently of places at this point. 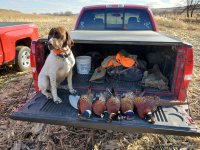 The lack of replies here is very representative of the lack of hunters I have been seeing in my immediate area (maybe Iowa in general). With bird numbers almost non-existent, easy to see no one hunting any longer in Iowa....and the wearther has been so miserable.
K

We need some snow!!! I also agree on the weather part, too warm most days and the lack of snow is disappointing. I would love to get a few inches of snow to stick around the last couple weeks of the season so I can see if the bird #'s in the area's I hunt really are that low or if I am just a terrible hunter. As for other pheasant hunters I've seen more pheasant hunters this season than I have in years. I do most of my hunting solo with a young energetic lab named Kepa so this late in the season I see quite a few pheasants flushing early. While I have yet to shoot a limit this season, I can't really complain Kepa and I have managed at least one bird most days and a couple roosters a time or two. Back at it this weekend, look for a report Monday.

I think we have a mega-season going, 40 and counting (5 weekends left), we got 5 both days this last weekend. I think we are only going to hunt Saturday take this Sunday off this weekend. Have hunted every weekend (both days), Vets Day, Thanksgiving and the friday after. I agree with the snow, might be some coming for this weekend, then they will be concentrated and sitting tight....will be home before noon on those days. Post some results, like to see how others are doing, hope you find them! If you find yourself coming to NW Iowa , let me know.
S

The birds are getting a little thin but sometimes they all move onto the public ground you're going to hunt. The solo pictured bird got up 40 yards behind me when my dog was 40 yards ahead of me, I dropped him but his head was up for the crash landing. Rusty pointed him about 70 yards from the crash site and after a feeble escape attempt, bird one was in the bag 5 minutes into the hunt. I missed two long shots on a rooster that made the mistake of landing withing the public ground after I was kind enough to miss and he sat tight until we got to where he landed. Rusty pointed a hen, and then the rooster, number two in the bag. Rusty goes on point 100yds later in a small briar patch that always has 1-2 rabbits. Thinking nothing of rabbits at the moment, I give a feeble kick, and of course a rooster gets up at my feet. I proceed to miss with both barrels but it looks like he sets down in the NE corner, right by my car. Upon arrival Rusty goes into tracking mode along a cedar filled corner that butts up to a busy paved road. I had already turned his collar up to E-Stop level just incase the road came into play, and of course it did. As his nose is to the ground tracking I see a gap in the cedars where saplings suddenly move against the fence. I sprint 10 yards to the gap with movement as a bird starts to flush and I see a rooster gaining elevation to make his escape across the road into the woods. I blocked the bird out with the barrels and pulled the trigger, the bird folded. A quick check confirmed no traffic and I told Rusty to 'get em!'. The bird had a long head start on the other side of a valley into a hillside covered with oak and hickory blown down by the derecho. Once we were both safely across the road I shut up and let Rusty work. I heard a lot of rustling around in the brush and eventually my dog came back with a live rooster in mouth. One hour and fifteen minutes in, roosters 29-31 were in the bag as seen in picture one. With as many people out hunting the same small areas as me I can't figure our how I've gotten so many birds, its certainly not my shooting. I'll chalk it up to good luck and a tenacious dog.

Nice write-up, if you aren't going out, you won't get any. Keep after them! It will be better with some winter weather. Well, not too much better than that outing! Good to see other's success.
M

I have the time but making that 2.5 hour drive both directions saps my motivation. Especially after the disappointing number of birds seen. this year. Me and my dogs can only walk so far. Private land hunters need not reply.

?
No season is complete without some questionable decisions.
K

MinnHunter said:
I have the time but making that 2.5 hour drive both directions saps my motivation. Especially after the disappointing number of birds seen. this year. Me and my dogs can only walk so far. Private land hunters need not reply.
Click to expand...