Spent some time hunting public ground in Story and Marshall counties today. Enjoy the Gilbert and Albion areas. You would have thought after yesterday's high winds and snow that the birds would be sitting tight this morning.

I found the exact opposite to be the case. Our first field was a smaller one and I noticed the first 15 to 20 feet of the western edge drifted in snow. I saw tracks upon entering and noticed the lack of wind. Around ten birds, two of which I could tell were roosters flushed wild from the first willow thicket we encountered. No shots--no problems I thought. As we continued on more tracks and early morning pheasant activity could be viewed along the edge and in the cover. Our first point; a beauty' had Sophie reposition and face me staring directly at the bird. Deep in the cover a hen flushed as I approached. This would be our only point until 10:13 a.m.!

Our morning was filled with wild flushes and quick flights to the adjoining picked corn fields. I did notice one rooster that did not leave the cover and lighted in the northeast corner. When we arrived Sophie locked solid on point. I felt certain this could not be our quarry but rooster one took flight and chose the left to right crossing shot. He is the far right left bird in the photo. Sophie and I traveled to another public piece and encountered more of the same. I could see the birds were mobile in the cover and flushing wildly as we hunted. Almost noon and one rooster in the bag with around 30 seen. Gonna be a tough day!

Our next piece brought us to a different county and after lunch. We headed straight to the thickets and willows in the cover. I eyed a cattail patch and added that to our hit list. Our next two points are hens. We have two older roosters flush wild to the picked corn and another soon after that flies close to a quarter mile prior to landing on the snow white landscape of an adjacent bean field.

The cattails are loaded with tracks. So many in fact that Sophie is confused and unable to stay on a chosen route. Seven to eight hens flush before rooster two selects a high-rising escape. He meets his end at the top of his ascent. He is the middle bird in the photo.

Our final bird I almost didn't shoot. We are in the second piece of public in Marshall county and it is thick cover. Foxtail, heavy big blue stem and a mix of brome grass. Sophie locates and re-locates this rooster three times. Each time a point is achieved, I notice his tracks exiting to the left or to the right of Sophie's point. He is a champion and has played this game before I thought. Our fourth point places him in a bent clump of big blue and I notice no exiting tracks. His flush was as magnificent as his colors on the early afternoon sunshine-filled sky. His left to right flight pattern proved to be his last and I partially regretted taking him to bag. Only partially as my thighs and quadriceps reminded me of our earlier walks!:laugh:

A picture of the spur on bird three. He was a crafty veteran!

I was definitely surprised at the difficulty Sophie and I had in pinning down birds today after the winds and snow. It was not easy and with more snow predicted tonight, it may be even tougher hunting in the future.
Today's tally--2 two-year old birds and one early hatch this season rooster. 13 roosters sighted and 26 hens.
Last edited: Nov 25, 2014

Again, a great hunt. I take great pride in outwitting those runners, like your last bird.

We tailed this one on Friday to the end of the cover. Seen 6 inches of tailfeathers sticking out of the sparse grass. Like yours, the flush was incredible to witness.. 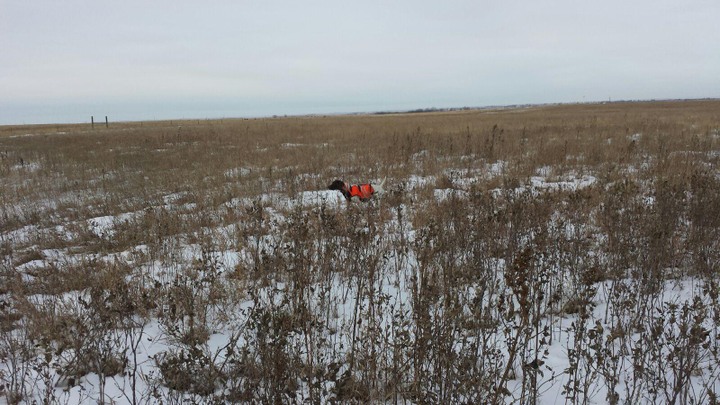 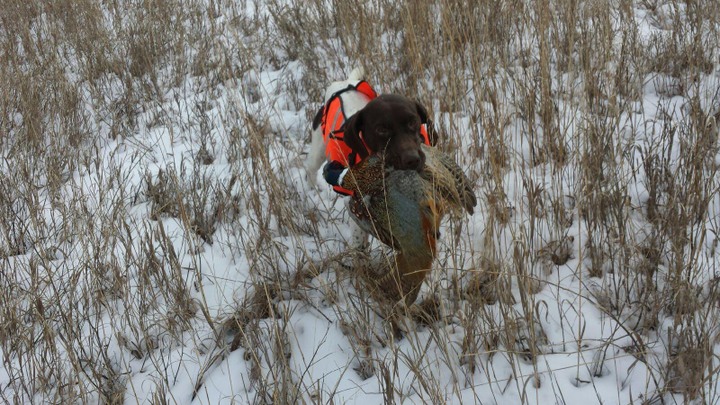 Probably just my "mellowing" with age but I do respect those birds that provide the greatest challenge. Maybe that is why I enjoy fishing so much now? The take and release is much easier there. Had a muskie in Chippewa Falls flowage this past summer that fought and fought. She was released after photos to provide that same thrill to someone else.

This "public bird" earned a spot in my memory as a true elusive. I am certain it had worked for him previously.

my thighs and quadriceps reminded me of our earlier walks!
Click to expand...

Lesson learned many years ago from a guy who decided to start taking Judo glasses in his mid-thirties: take an aspirin BEFORE you begin using muscles that are going to be taxed beyond their normal use. Reduces the after-effect.


Nice images, good stories, life is good.
Kis
For hunters, Fall is the island towards which we swim all year.

Tossed a bottle in the bag today for my upcoming southern quail/golf outing!