We hunted our regular lease Saturday morning three boats going out, zero teal for the day. Hunted another piece of property Sunday and four of us shot 15 teal. It was a real nice duck hunt. 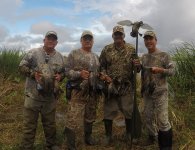 Minnesota just had its first early teal season. By written accounts in a local weekly outdoor column, there was a crap load of violations. And those were only the ones who were caught. There was likely a lot more. Hunters must not have been able to accurately identify teal from wood ducks, which do not yet have full plumage here and are very similar in size. Additionally, the legal shooting hours didn't start until sunrise as opposed to the general waterfowl season which is 30 minutes before sunrise. I presume this was instituted to better help identify teal, which didn't work.

I hope it is not continued next season. We have an early teal season, a youth season, and an early goose season all for a few weeks prior to the general waterfowl season. It sends birds outta here real quick. The governing agency here has catered to specific demographics at the expense of everyone else.
D

For beginner duck hunters I don't see how they would be able to see the difference in wood ducks and teal. We see a few wood ducks during our hunts and recognize them. It is a tough call but I hope we never lose our special teal season down here. I am trying to get Black Bellied Whistling Tree ducks added to our teal season limit. They are down here by the bunches during September.
G

Delta Duckman said:
For beginner duck hunters I don't see how they would be able to see the difference in wood ducks and teal. We see a few wood ducks during our hunts and recognize them.
Click to expand...

I have waterfowl hunted for 23 years and in the early morning light, they are difficult to tell apart sometimes. Going by size or wing beat is not always completely accurate. The only way to tell them apart is by determining color, which you may not be able to distinguish before you shoot. So in that case, you do not shoot if one is legal and the other is not. Clearly, a lot of the teal hunters during our early season did not abide by that rule and some paid the price when they were caught.