Minot to Williston another 10inches today.

If you get too much, send a little down to NW Iowa. We are still in a very dry situation locally. We could do without all the high wind alterts we have had over the past 2 weeks. I am hoping NW South Dakota gets some spring rains, will be heading out there in just under 2 months for our annual prairie dog shoot....the 4 bests days of the sumnmer! I still need to get reloaded from last year.

remy3424 said:
We are still in a very dry situation locally.
Click to expand...

Most of Minnesota was in that situation in 2021, starting about a year ago. The entire western half of the state is now drought-free, and the eastern half is now only listed as "abnormally dry." Rivers are flowing higher again and lakes are filling up. Just what we needed.
J

What a slap in the face.....went to the farm after I had been snowed in for 4 days and the area (20) acres I am going to burn down and reseed with high quality seed mix for pheasant habitat was completely blown clear of any snow whatsoever and it's a low flat area......well that's a foot up the rear as I was hoping I would get some good moisture there.

That sounds like the kind of conditions that kills most of the birds that don't have trees to retreat to. In the earlier 2000s we had 2 rough winters back-to-back...it was a quite a rebuild for several years after. It was only the ones that had access to trees that survived to repopulate. I hope it is not as bad as I am imagining it might be. And this is just as we thought we were clear of the worst of the snow season.
B

JO BO said:
What a slap in the face.....went to the farm after I had been snowed in for 4 days and the area (20) acres I am going to burn down and reseed with high quality seed mix for pheasant habitat was completely blown clear of any snow whatsoever and it's a low flat area......well that's a foot up the rear as I was hoping I would get some good moisture there.
Click to expand...

Oh gosh- that’s a lot of snow!! I hate that- it seems like they get way too much or just too dry. I thought we were in the clear with the snow this winter! ….I hope everyone fairs ok along with the birds. ND is my favorite state to hunt by far!
B

Friday Forecast for Minot:
We had 46"+ over Easter. Somebody has a sense of humor.

I took my two dogs out in the country to a road we walk them on a lot. For a few weeks prior to the storm, you could count on them pointing on 2-3 roosters each time. Oddly enough we were not seeing any hens. One trip they pointed on a pair of huns. The storm hit over Easter and it wasn't until this afternoon that we took them out that way again. The suns powerful rays are causing more shrinkage than if I were to jump in Lake Sakakawea. The snow melt was not adding water to the potholes yet. Hopefully some is soaking into the ground.

On this outing, the dogs pointed on two different pairs of huns which I took as a great sign. A little later on their run, Willow locked in by a tree with some grass around it amongst all the snow. Shortly after locking in, a hen pheasant flushed. We saw no roosters on this trip but it is encouraging to see the hen and the huns. This isn't an area that has a ton of cover so I take this as a promising sign that it is highly likely that our birds survived this April Snowpocalypse.
A

Be interesting to see what the drought monitor says tomorrow.
A

According to the webcams it seems to be melting in, that's good. Drought monitor still has a way to go to get out of the red, but did show improvement.
A

We are getting a fair amount of rain today. It will be interesting to see the totals. We took the dogs out yesterday to our frequented spot to get them exercise. Saw a couple of roosters. We went to supper with another couple. He owns some prime pheasant land that I hunt and he said that most appear to have survived the big Easter blizzard. This again is great news to hear.

Rain has turned to snow. 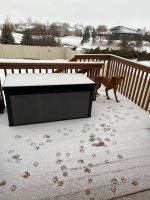 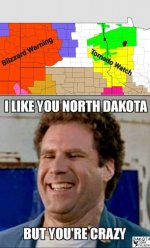 I saw this tonight and I thought I would share: