Owing to some health issues, one after another, I didn't get out last year, and had some trepidation about my leg strength for hunting this year.

Tinker and I went out earlier this week to try out my legs which did not do so well. No birds and no energy to hunt the nooks and crannies to find some.
We went out again today, and turned out doubling the distance of the earlier hunt, and worried up this bird on the trip back to the car.

Tink thought she was in a Sporting Dogs photoshoot. I could look over her head and see the rooster 10 yards or so ahead of her; she was solid and the bird was immobile-really a memorable sight.
I gave Tink the go-ahead, the bird went up and away to the left, and accidentally ran into my shot pattern.

The rest was just like former years: retrieve, praise, field dressing the bird, heart and liver to Tink and a small thank you to the times and dogs of the years past.

I'm drained, but hoping I can build on this for hunts in the near future.

I used the Winchester 370 single shot 12ga, cut down and with a mod choke. I'm not ready for a heavier gun for a while yet. 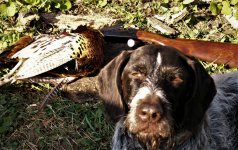 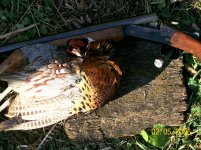 Last edited: Oct 23, 2022
Kis
For hunters, Fall is the island towards which we swim all year.

Great story and photos. Your strength will build as you continue to walk. Nothing like a single shot gun to improve one's shooting haha.
Last edited: Oct 21, 2022
- From the office of Stoeger, Colt, Browning & Savage - Have Guns, Will Travel
- Kansas: Big Cock Country

How awesome kismet. Something tells me that bird will taste like no other.

Oh,and I finally figured out how to change the date on the camera I just started using. It now thinks it is 2022 and not 2006.
Kis
For hunters, Fall is the island towards which we swim all year.

Good for you, and Tink! I bet that felt great!

Also, Tinker is a long-used name for dogs by my family so we must have some kind of karma konnection, man.
- From the office of Stoeger, Colt, Browning & Savage - Have Guns, Will Travel
- Kansas: Big Cock Country

Man I bet that feels almost like a first bird after that long! Awesome story, congratulations!

Glad to here you are getting out , here is wishing you a real good season for you and Tink !!

The single shot brings back memories of my youth thanks for sharing .

Well, six trips out and this is only the second bird harvested. I haven't been able to get to the nooks and crannies of the public ground until today, when I made the attempt to both get down the slopes AND get back up them.
Tinker was delighted and the weather was near perfect except for some occasional wind.

This is the second bird she pointed; the first flushed close to me and chose to fly directly at me. I lined up a shot and my mind screamed "pheasantburger!!!", so I pivoted and tried a going-away shot, half balanced on one leg. No joy. Had I not waited, it would have been one of those birds you regret shooting, it was just sooo close, it would have been shot to pieces.

We went on, Tinker working not the saddle, but the woods adjoining them--heavy brush and some junk trees. She locked up about 15 feet in and when I felt ready, she moved in on command and up went our bird. The old 370 Winchester 12ga worked just fine.

Legs are coming along, but not like ever before in my life. I put on more, and harder, distance on today and got to where (at least one) bird was, so I'm pleased. I'll take what I can get.

Now the pictures: it looks like the lens cover shutter didn't open all the way, so there's some dynamic cropping. They still work for me. Good dog, good gun, good day--all on very old (and now) aching legs. I call it hunting. 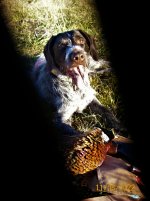 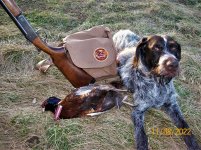 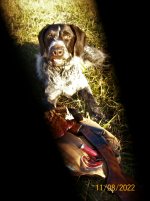 Kis
For hunters, Fall is the island towards which we swim all year.

Great report. Sounds like you are coming along nicely. Keep it up and be careful out there. We want more stories..Rooster, Rooster

Keep it up. Great report and beautiful dog. Reminds me so much as my previous beloved Drahthaar
Maynard Reece Byrd
Dodge City